​Stationed in South and Central Korea from April 1952 through April 1953. Earns three medals, at least one of which Jim incorporates into Ubu's Military Mind in 1962.
1953
April 6: Leaves Korea on USNS General Gordon 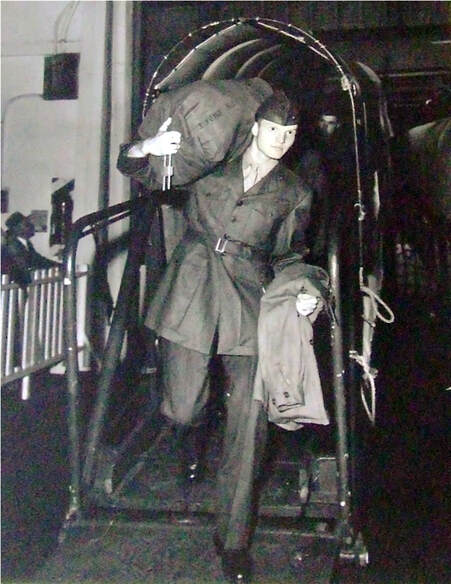 The Belknaps later move to Moorestown, New Jersey, with their three children: Lisa, Eugene III ("Gene"), and Bryant. Helen Brewton joins them.
1955
June: Withdraws from Ruskin and applies to the Pennsylvania Academy of the Fine Arts (PAFA); gives address as 2411 Spruce St., Philadelphia.

July 26: Admitted to PAFA. Mentors include instructors Franklin Watkins, whose influence is felt in Jim's religious-themed paintings; Hobson Pittman, whose subdued palette is echoed in Jim's The Garden (1957); and Theodor ("Ted") Siegl, who offers Jim an apprenticeship in the conservation department.​
​
​Becomes close friends with fellow students Dan Miller (b. 1928) and Joseph Amarotico (1931-1985), as well as Morel ("Mo") Pagano (1929-2016); Mo and Joe were also combat veterans. Jim is unable to tolerate the chemicals in the conservation department and Joe Amarotico replaces him, becoming a renowned paintings conservator, Surrealist painter, and teacher at PAFA. Dan Miller began teaching at PAFA in 1964 and continues to do so, having served as Dean of Faculty, Acting Dean of the School, Chairman of the Painting Department, and Chair of the MFA Program.
Works at The Print Club (now Print Center), where he sees the work of CoBrA artists Karel Appel and Asger Jorn. He is also a regular visiting student at the Barnes Foundation.
​
Surrealism, as expressed by André Breton and Marcel Duchamp, is a strong and pervasive theme in Jim's work. However, Alfred Jarry's writings and imaginary science of 'Pataphysics ignite Jim's artistic practice. Interest in Jarry's work is unusual in an American artist in the early 1960s, and it's possible he encountered Jarry's writings while a student in England. Two rare French 'Pataphysics books were found among Jim's things in 2008 (they are now in the James Brewton Archive, University of Pennsylvania's Kislak Center for Special Collections, Rare Books and Manuscripts). Cy Twombly, Jasper Johns, Robert Rauschenberg, and Jean Dubuffet also inspire Jim.

​Nov. 24: 155th Annual Exhibition of Oil Painting and Sculpture, co-curated by PAFA and the Detroit Institute of Arts, opens in Detroit (through Jan. 3, 1960; then travels to Philadelphia). PAFA purchases The Suicide of Judas, described in Jim’s hand as being tempera, oil and charcoal. Lists his home address as 1026 Locust Street, Philadelphia.
1960
Jan. 24 - Feb. 28: 155th Annual Exhibition of Oil Painting and Sculpture on display in Philadelphia, curated by PAFA in collaboration with the Detroit Institute of Arts (J. Henry Schiedt Memorial Prize for The Suicide of Judas).
1961
​Meets Barbara Holland, a writer. They begin an affair that lasts on and off until 1964 (or 1965). In addition to Dan Miller and Joe Amarotico, Jim's circle of friends includes Ronald and Patricia Weingrad; Barry and Marianne Promos; Elizabeth Osborne and her brother, Philip; Bruce Broede and his wife, Carol (now Carol Olson); Claire Van Vliet; and Jim McWilliams. Through Van Vliet, Jim meets Danish artist Erik Nyholm, who is in Philadelphia for an exhibition of his ceramics at Makler Gallery, January 1962. ​
1962
Travels with Barbara to Denmark, along with Claire Van Vliet. Barbara is pregnant; she and Jim rent a place in Funder, near Erik Nyholm’s farm in Silkeborg. Daughter, Emily, born Sept. 10. Jim meets Asger Jorn, whose genius, admiration for Jarry's 'Pataphysics, and interest in graffiti leads to a sustained dialogue through art. Jim's painting takes on the wildly colorful exuberance of the CoBrA artists.
1963
Returns to Philadelphia.

Jan. 8 - Feb. 9: Lends artworks to show of Asger Jorn's graphic work at the Philadelphia Museum of Art.
​
​Breakup of relationship with Barbara Holland (they may have reconciled, but separated by 1965).

Writes, "In 1964 I founded the J.E. Brewton Institute of Comparative Vandalism for our College of Pataphysics to correspond with the Scandinavian Institute for Comparative Vandalism, Asger Jorn, Founder-Director.... We are also further investigating soap-bubble dynamics for the late C.V. Boys, rules of vertical stance, how to affirme and deny a wall or canvas, reductions and four-legged tripods." (Artist's Statement, Graffiti Pataphysic, ​Kenmore Galleries solo exhibition, 3 Feb.-17 Feb. 1965.)
​
​Shows Letter to My Daughter in Regional Exhibition of Paintings, Sculpture, Prints, and Drawings. 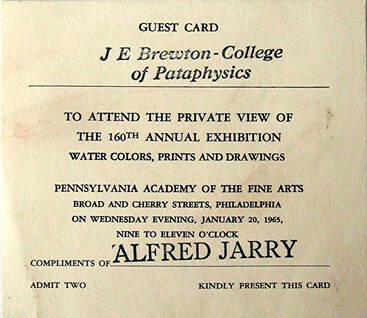 Invitation to a PAFA show in 1965, artified by Jim Brewton
1965
Feb. 3 - 17: Solo exhibition, Graffiti Pataphysic, Kenmore Galleries, 122 S. 18th St., Philadelphia. Harry Kulkowitz, owner/director of Kenmore Galleries, represents Jim and displays his work regularly. Andy Warhol, in town for his ground-breaking show at the Institute for Contemporary Art, notices The Pataphysics Times in Kenmore's window, and leaves an invitation to the ICA opening "for The Pataphysics Times artist."

Spring: Travels to Denmark, helps Asger Jorn and Erik Nyholm prepare an exhibition and set up Jorn's "Comparative Vandalism" project files in the new Silkeborg Kunstmuseum. Possibly meets Jean Dubuffet in Silkeborg. During a residency at Aage Damgaard's Angli shirt factory (Damgaard later opens the Herning Kunstmuseum on the site), Jim paints many of the works displayed in his show at Galerie AP in Copenhagen. From correspondence with Nyholm, it appears that Jim returns to Philadelphia before the AP Galerie show opens.

​May 26: Passport issued for Jim and Emily, which the two of them later vandalize (or "artify").

May 4: Adoption of Emily by Mark Schilling is finalized.

May 15: Midnight opening of group show at the Socrates Perakis Art Gallery; artists are Brewton, Jim McWilliams, Thomas Chimes and sculptor Paul Anthony Greenwood.
​By the time he died in 1967, Brewton had “had several one-man shows, and museum curators were beginning to exhibit interest,” as Nessa Forman wrote in The Philadelphia Inquirer. “There was an artist,” Forman continued, “who was ahead of his time, who was brilliant, sensitive and nonviolent, who loved his art and just wanted to paint.”
May 20: Death of Helen Brewton, Jim's mother.

Memorial show at the Peale Galleries at PAFA, March 7 through April 14, with Robert Rauschenberg works. ​

Memorial show at the Kenmore Galleries, curated by Harry Kulkowitz and Patricia Weingrad. Proceeds from artwork sales are given to The James Edward Brewton Memorial Fund at PAFA, and Jim’s collection of art books is donated to the PAFA library.

Barbara Holland Schilling puts Letter to My Daughter out for the trash while Emily is away at boarding school.